What began as an ambitious project to realize development potential through the creation of electric power supply and agricultural irrigation, has deteriorated in to a diplomatic standoff in a region wrought with geopolitical tensions.”, said the senators.

The United States should strive to be an agent of stability and peace in East Africa, to encourage all pa1ties to resolve disputes through diplomacy, they demanded. “As you know, after disapproving of a draft agreement written by the United States that was perceived to be favoring Egypt’s position, Ethiopia withdrew from the negotiations in February of this year, leaving the region in limbo and susceptible to dangerous miscalculation.”, says their letter.

Senators Cory A. Booker and Christopher A. Coons quoted Prime Minister Abiy Ahmed as saying “Ethiopia would begin filing the GERD’ reservoir in July without an agreement in place.” With the dam near completion and both sides ratcheting up hostile rhetoric, the United States must help de-escalate the situation, the senators stressed.

“The perception of U.S. partiality, however, makes such an effort more difficult by hardening the parties’ positions and limiting the Administration’ stability to serve as an honest broker for a resolution of the dispute,” the letter of the senators reads. 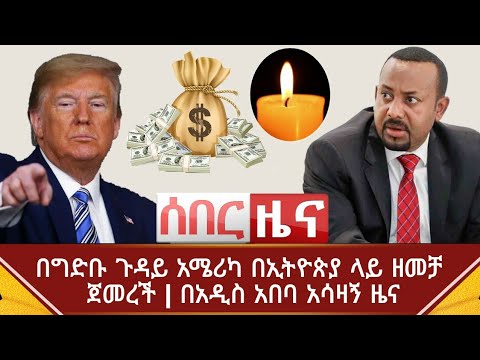 Abel Birhanu daily Ethiopian news update June 29, 20202 What began as an ambitious project to realize development potential through the creation of el...